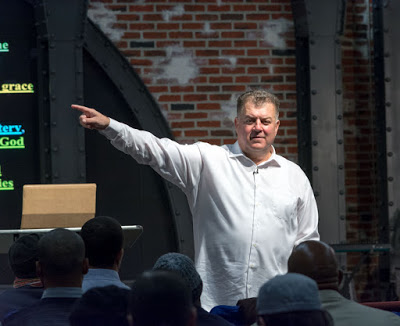 Right now the Lord is looking for those who are focused on what He wants to do in these end times and what He wants to do through them. While it may seem that the Lord sidesteps us at times, He is actually trying to help us understand His plan and purpose. Many Christians believe that they’ll be raptured, and just fly away one day, but that is not what the Early Church taught. That false end-time rapture eschatology can be traced back to two Jesuit priests who introduced “futurist theology” which is where the modern-day rapture theology comes from. It states that the 144,000 are literal Jews. The Word says that we are Jews inwardly (Rom. 2:28), and the Early Church taught that the 144,000 were spiritual Jews, or those who have had a circumcision of the heart.

In the end those who have false teaching will be wiped away and destroyed. The Early Church taught that there will be those who will try to ascend the mountain of God, but they’ll be unable to because of their beastly understanding. They are those who try to destroy true doctrine, who ultimately themselves will be destroyed. We were taught that grace is unmerited favor, but grace is actually revelation. Noah is said to have found grace, which shows that grace was in the Old Testament long before Jesus was crucified (Gen. 6:8). What was the grace Noah had? It was that God told him it was going to flood. At the time of Noah, no one had ever seen rain because it had never rained before the flood (Gen. 2:5). Because of the revelation the Lord gave to Noah, Noah and his family were saved by grace through faith. The grace was that God spoke to Noah about what was going to happen; Noah’s faith was the action he took in building the ark because he trusted and believed God. Let’s say Noah decided not to do anything with the revelation given to him and chose not to build the ark…If this were the case then he and his whole family would have been wiped away with everyone else. Everyone that God used all throughout the Bible was graced with secret knowledge, or revelation.

The Early Church taught that the charismata was a dispensation of grace given in order to prepare the church for the coming of Christ, and that there would be apostles and prophets until the end of the age. The churches that believe apostles and prophets are done away with have excluded themselves from being a part of this end time remnant if they don’t wake up. Part of the charismata was the ability to have divine knowledge of God’s Word in order to understand and step into what God was about to do. Grace puts these gifts into motion. When God gives us the revelation of what is coming, and what He wants to do through us, it’s going to be tested. The Lord is testing us even now to see if we’re going to be like Noah, to see if we’re going to be faithful to the divine plan that God is giving us.

I feel in my spirit that we better increase our faith to greater levels for what is coming. For example, look at what happened with Covid – it completely exposed the lack of faith in the church. How can you say you have faith and have a mask on? Revivalist John G. Lake had so much faith that he said that if God did not heal him when he was sick then he’d just go home to be with the Lord. He had no fear of death. If you’re afraid to die it’s because you’re not right with the Lord. John G. Lake actually held the Bubonic Plague in his hand and had scientists watch as the plague died right in the palm of his hand. If the church doesn’t have the faith to stand up to Covid, then they definitely won’t be ready for the worse that is coming. If Los Angeles does not take care of the homeless situation the Bubonic Plague is going to break out and the only ones who are going to be able to handle it are the remnant.

The Early Church taught that the end time church as a whole would be so destitute, and in such a bad state, that God would send the Spirit of Elijah in order to pull the remnant out and prepare them. Early Church fathers Origen and Victorinus taught that the church cannot be perfected without being under an Elijah ministry and only those under an Elijah ministry will make it at the end of the age. The Elijah ministry is an apostolic ministry. Paul said it was his desire to have the church presented to the Lord perfect (Eph. 5:27). This perfecting process happens through the process of revelation and it is for the saints who are able to understand the “deep things of God” (1 Corinthians 2).

The 144,000 are those who are prepared by the teachings of Elijah. The Early Church taught that Elijah would prepare their souls with revelation that will make them fit to be able to handle the glory of God. Without that Word to prepare them they would not have been able to endure the glory and it would’ve destroyed them. Jesus said that Elijah will come and restore all things (Matthew 17). He is coming to restore the church to be like Adam before the fall. The book of Revelation is not the end of the world; instead, it’s revealing what God is going to do at the end. He wants to bring His church back to the beginning, Genesis again.

This end time move has already started. We have a very short amount of time to die to ourselves and get ready. There are going to be those who come in during the last seconds, who are sincere, and the Lord is going to get them across. This is going to unfold in the blink of an eye. The fuse is lit…those who didn’t get ready will be crying to come in when this thing comes to the end. We need eyes to see and ears to hear to get into the position in which we’ve been called. Amen.